A statement from William Digry, Commercial Agent in the port of Flushing (the present day city of Vlissingen), the Netherlands. Click on the image below to view the full document in a new window. 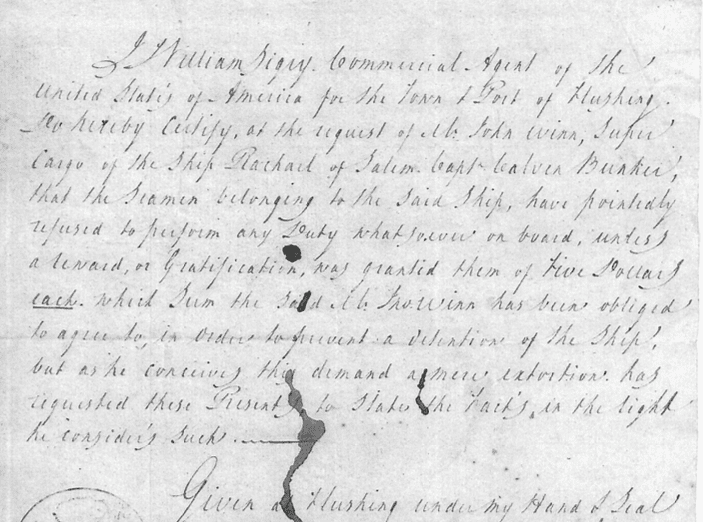 Source: "Peele Family Papers, 1753-1871", Box 4, Folder 1, MH 5, Finding Aid; Phillips Library, Peabody Essex Museum, Salem, Mass.
Transcription
I William Digry, Commercial Agent of the United States of America for the Town & Port of Flushing, do hereby Certify, at the request of Mr. John Winn, Super Cargo of the Ship Rachel of Salem, Capt. Calvin Bunker, that the Seamen belonging to the Said Ship have pointedly refused to perform any Duty whatsoever on board, unless a reward, or Gratification, was granted to them of Five Dollars each. Which Sum the said Mr. John Winn has been obliged to agree to in order to prevent a desertion of the Ship, but as he conceives this demand as a new extortion, has requested these ...  to .... the ...., in the light he is considering such.

Given at Flushing under my Hand & Seal of Office this twenty-fifth day of July in the year one thousand eight hundred and five,
William Digry