An accounting by John Winn, given to a Notary in Flushing (Vlissingen), Netherlands during the voyage, with regard to the transgressions of Daniel Hartwell. ​Click on the image below to view the full document in a new window. 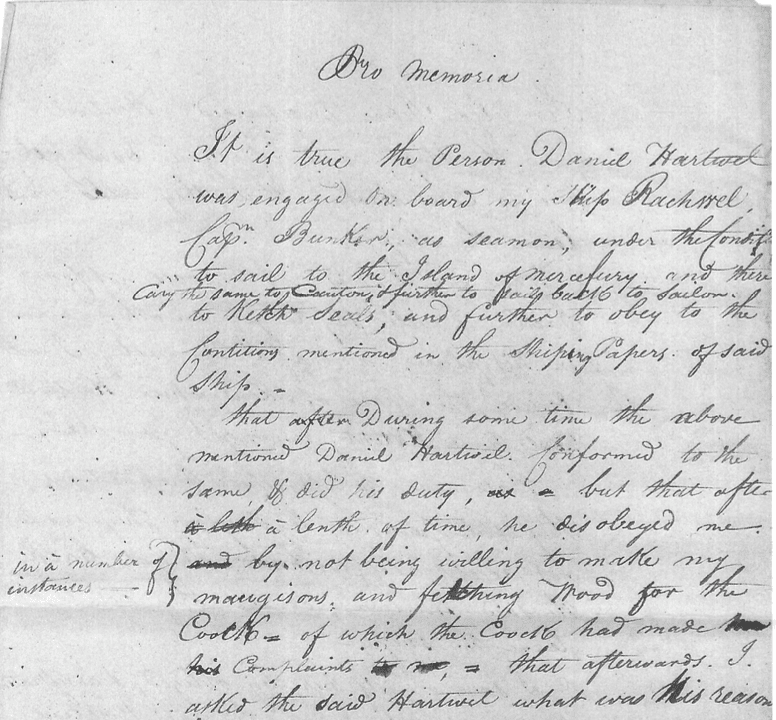 It is true the person Daniel Hartwell was engaged on board my Ship Rachel, Capn Bunker, as seaman, under the condition to sail to the Island of Massafuero and there carrying the same to Canton, and further back to Salem, to catch Seals, and further to obey to the conditions mentioned in the Shipping Papers of said ship.

That after during some time the above mentioned Daniel Hartwell conformed to the same and did his duty, but that after a length of time, he disobeyed me in a number of instances by not being willing to make my moccasins, and fetching wood for the Cook, of which the Cook had made complaints. That afterwards I asked the said Hartwell what was his reason for not being willing to make my moccasins, on which he answered, that he had made enough for me, and that I was as able to make them as he was, wherefore he should make no more for me on which I said to him if he refused all kinds of Labour, there were no more provisions of the ship for him.

After this, the said Hartwell left me and during the same day the greatest part of the Equipage, came to me and said

Page 2
Sir, you have Discharged Hartwell from the ship, and if you don’t get him to come back, that they all would leave the ship.

Where on I said, if he does not come back, I will try to get another man in his place, and if I cannot, I will divide the share of skins which Hartwell could have caught amongst you all.

That nevertheless these propositions, they still persisted by saying they would not accept any without, and I should get back to the said Hartwell, or else they would all leave the ship.

I saw myself hereby obliged and necessitated to do my best for to get the said Hartwell back. Wherefore, I went to the said Hartwell and asked him to return to the ship, which he refused, without Compensations, saying that he would return to the ship provided I would discharge him of whatever he might be indebted to the ship until that day for the Clothes which he had received - which you agreed to - whereof is witness the second mate named Peale Clark - that he further was to return the following day to his duty

Page 3
and receive a receipt for the same - that on the day following, I called on him and asked him to go home with me, and that I would give him his Receipt, whereon, he answered, No, I will not go back for that sum, and as such, I was obliged to make a new agreement with him, and finally was fixed at 400 Dollars - in payment of which I gave him a promissory note of a supercargo belonging to another Vessel, where after he returned, with promise to do his duty, as before, and obey his officers. He consequently returned to his Duty, but not with the exactitude as he had done before.

We in consequently after having finished our Sealing, left the Island and sailed for Canton - that arrived at the Island Sumatra. He in company with 3 others stole the long boat and deserted the ship - that in consequence the Captain went in the morning ashore, and found the boat, and acquainted the Governor that 4 of his sailors had Deserted, where on, the Governor sent out some soldiers and found them, and put them into prison, here of being acquainted You desired the named Hartwell to come on board, which he refused to do, which you nevertheless obliged him to do so, and Continued on your Voyage until China

Page 4
that being arrived there, I told him knowing the unjustness for the obligation of my giving him that Bill on the Island of Massafuero, that I offered to overlook his Desertion on the Island Sumatra, and pay him the same as his agreement was, and as all the rest of the sailors had received, provided he would return or give up that Bill which he had extorted from you - which nevertheless he refused to do.

That in that Place the Destination of the Voyage was altered, and as such obliged to make a new agreement with the Equipage we consequently asked this Hartwell to to the voyage and sign the Papers, which he refused to do, where on we said then you may go ashore and get another berth, which nevertheless the said Hartwell refused and stayed on board.

We continued the voyage from Canton to here where we demanded the restitution of that Bill and said if he give it up, you would settle with him, agreeable to the rest of the ship’s Company, which he again still refused.

We state her by to the Gentlemen present that, according to the laws of the United States of America, the above person Hartwell had forfeited all property and claims on board the ship for that voyage through his Desertion, which was to Canton,

Page 5
but that nevertheless if he would give up the said Bill which he extorted from you unjustly, you were still willing to settle with him on the same footing as you did the other Equipage.

I hope that the Gentlemen will agree with me in remarking the obligation and the circumstances I was in to give him that note, through the rest of the equipage saying they would all leave the ship, if so be I did not get that sailor to come back, and as such it was an extortion, and in consequence he has no right to the same.

Wrote and signed at Flushing the 16th July 1805 at Ten o’clock in the evening,
John Winn