An agreement between Calvin Bunker, Captain of the ship Rachel, and John Winn, one of the ship's owners. ​Click on the image below to view the full document in a new window. 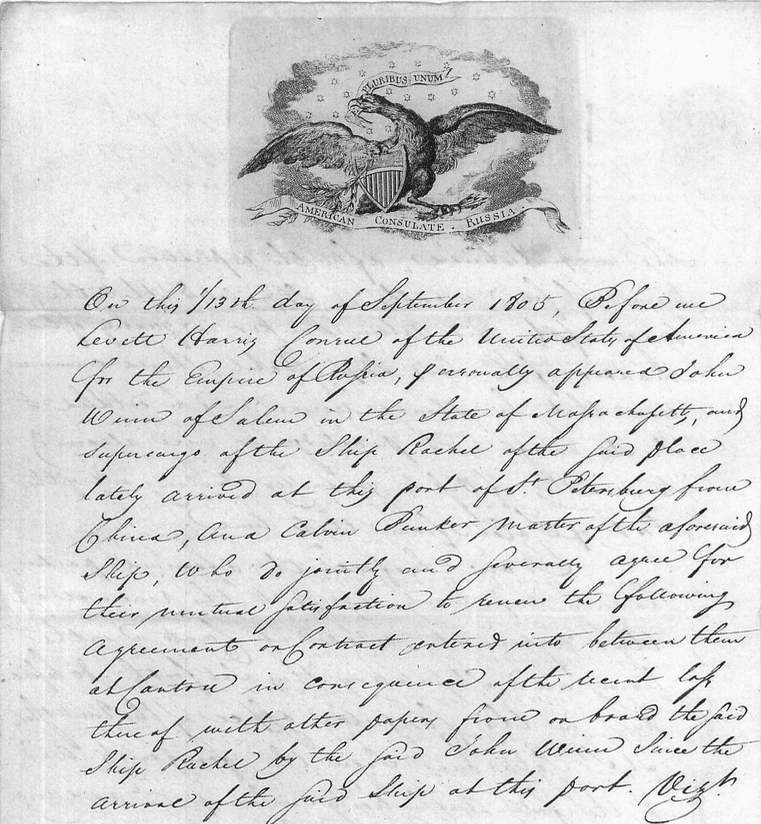 Page 2
On this 13th day of September, 1805, before me Levett Harris, Consul of the United States of America for the Empire of Russia, formally appeared John Winn of Salem in the state of Massachusetts, and Supercargo of the ship Rachel of the said place, lately arrived at this port of St. Petersburg from China, and Calvin Bunker, master of the aforesaid ship, who do jointly and formally agree for their mutual satisfaction to renew the following agreement on contract entered into between them at Canton in consequence of the ??? there of with other papers from on board the said ship Rachel by the said John Winn since the arrival of the said ship at this port. Viz.

That the aforementioned parties, namely John Winn and Calvin Bunker, did at Canton covenant and agree that the said Calvin Bunker should continue to navigate and command the aforesaid ship Rachel for the ??? of five months to commence from the fifteenth day of December last, the period of the said ship's departure from Canton, and that on her arrival in ? whither

Page 3
she was detained, after the ? of the term of five months as stipulated that the wages of the said Calvin Bunker, in quality of the commander of the said ship Rachel, should commence and he should receive and be entitled to such wages and privileges as were allowed to masters of vessels generally sailing out of the port of Salem from that time.

Now therefore the aforesaid parties having respectively agreed to this renewal of their agreement made at Canton ? ? and stipulating they set forth, so before me in this Consular office of the United States at St. Petersburg, sign the foregoing and to the full authority whereof I add my name and Consular Seal the day and year above written.

Certified as above
Levett Harris,
Consul U. S. America
[Russia first recognized the United States on October 28, 1803, when Czar Alexander I declared his decision to recognize Levett Harris as American Consul at St. Petersburg.]