The following document from the Essex County Court of Common Pleas shows a request from Daniel Hartwell for an attachment of goods valuing $70 from Calvin Bunker. ​Click on the image below to view the full document in a new window. 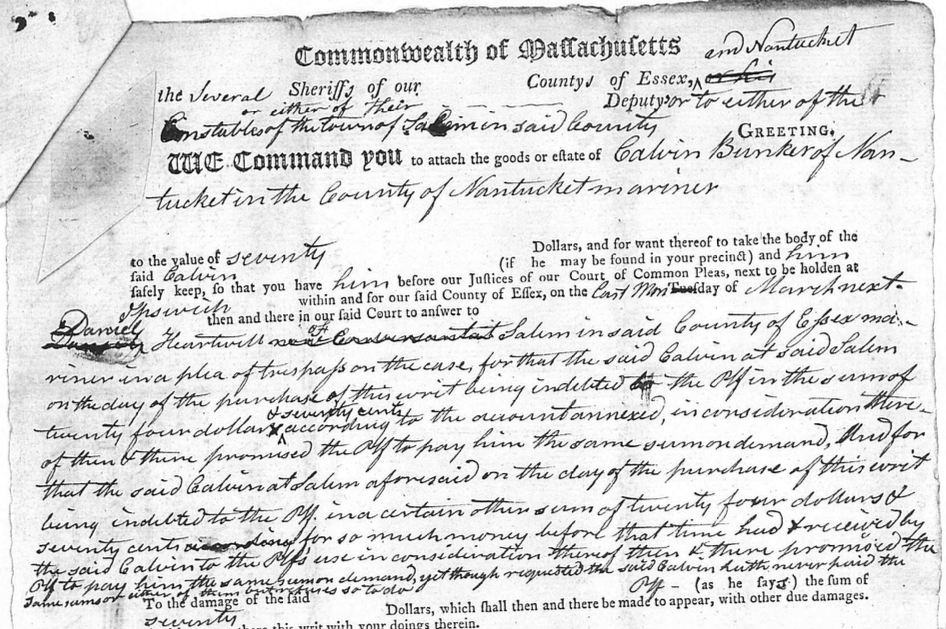 Source: Essex County.Court of Common Pleas
Transcription
Commonwealth of Massachusetts
The Several Sheriffs of our Countys of Essex and Nantucket, Deputy to either of the Constables of the town of Salem in said County

We command you to attach the goods or estate of Calvin Bunker of Nantucket in the County of Nantucket, mariner, to the value of seventy Dollars, and for want thereof to take the body of the said Calvin (if he may be found in your precinct) and him safely keep to that you have him before our Justices of our Court of Common Pleas, next to be holden at Ipswich within and for our said County of Essex, on the last Monday of March next, then and there in our said Court to answer to

To the damage of the said Pltf (as he says) the sum of seventy Dollars, which shall then and there be made to appear, with other due damages.

And have you there this writ with your your doings therein.

Witness Timothy Pickering, Esquire, at Salem, this eleventh day of January in the year of our Lord one thousand eight hundred and six
Ichabod Tucker, CLERK