The following document from the Essex Court of Common Pleas awards Daniel Hartwell $24.90. ​Click on the image below to view the entire document in a new window, and note the transcription at the bottom. 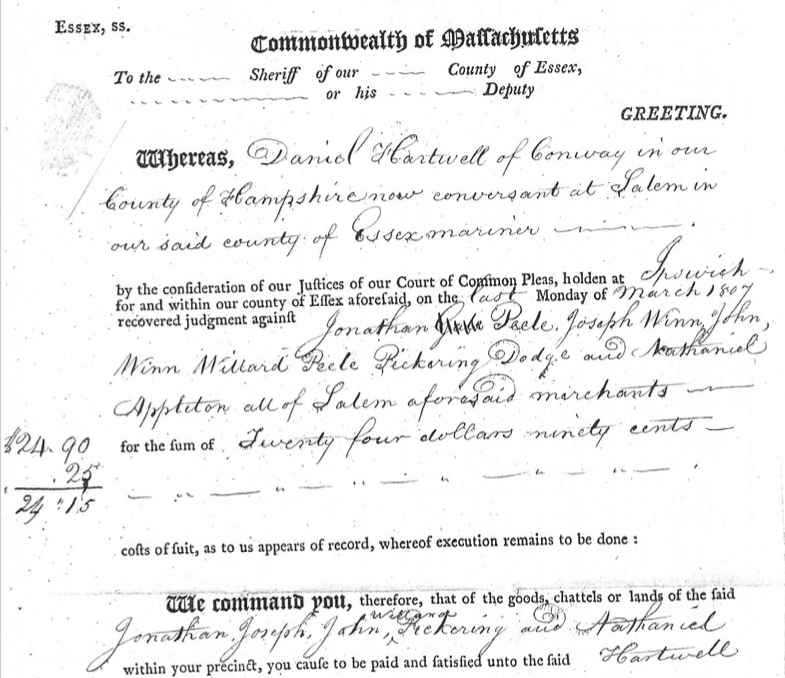 Whereas, Daniel Hartwell of Conway in our County of Hampshire now conversant at Salem in our said county of Essex, mariner, by the consideration of our Justices of our Court of Common Pleas, holden at Ipswich for and within our county of Essex aforesaid, on the last Monday of March, 1807, recovered judgment against Jonathan Peele, Joseph Winn, John Winn, Willard Peele, Pickering Dodge and Nathaniel Appleton, all of Salem aforesaid merchants for the sum of twenty four dollars, ninety cents, $24.90, costs of suit, as to us appears of record, whereof execution remains to be done:

Witness Timothy Pickering, Esq. at Salem this Sixth day of April in the year of our Lord one thousand eight hundred and seven.
Ichabod Tucker, Clerk
N.289