This is the original agreement between the builders of the Ship Rachel and its new owners. Click on the image below to view the full document in a new window. 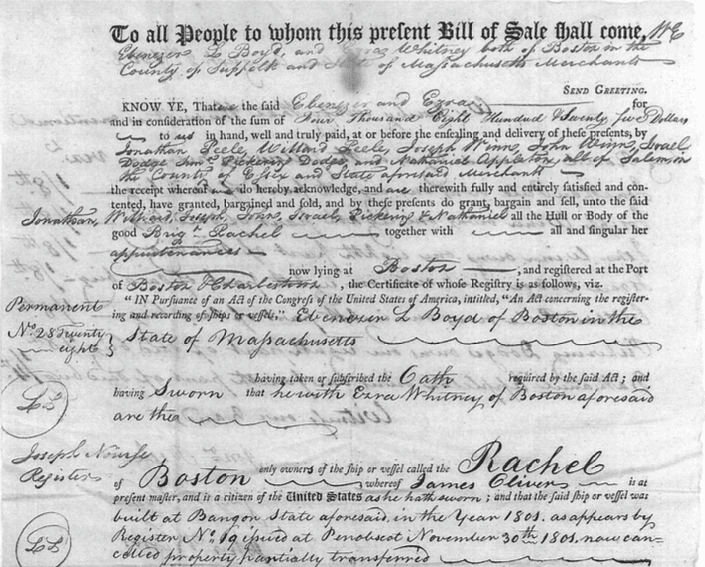 Page 1
To all People to whom this Present Bill of Sale shall come, we Ebenezer L. Boyd and Ezra Whitney, both of Boston in the county of Suffolk and state of Massachusetts, merchants

Know ye, That the said Ebenezer and Ezra for and in consideration of the sum of four thousand eight hundred twenty five dollars to and in hand, well and truly paid, at or before the ensealing and delivery of these presents, by Jonathan Peele, Willard Peele, Joseph Winn, John Winn, Israel Dodge Jr., Pickering Dodge, and Nathaniel Appleton, all of Salem in the county of Essex and state aforementioned, merchants, the receipt whereof do hereby acknowledge and are therewith fully and entirely satisfied and contented, have granted, bargained and fold, and by these presents do grant, bargain and fell, until the said Jonathan, Willard, Joseph, John, Israel, Pickering & Nathaniel all the Hull or Body of the good Brig Rachel together ___ with all and singular her apprentices (?) now lying at Boston, and registered at the Port of Boston & Charlestown, the certificate whose Registry is as follows, viz.
"In Pursuance of an Act of the Congress of the United States of America, intitled, "An Act concerning the registration and recording of ships or vessels," Ebenezer L. Boyd of Boston in the State of Massachusetts having taken or subscribed the Oath required by the said Act; and having Sworn that herewith Ezra Whitney of Boston aforesaid are the only owners of the ship or vessel called the Rachel of Boston, whereof James Glivens (?) is at present master, and is a citizen of the United States as he has sworn; and that the said ship or vessel was built at Bangor, state aforesaid, in the year 1801, as appears by Register No. 19 issued at Penobscot November 30th 1801 now cancelled property partially transferred
And Robert