The following document discusses a ruling for Daniel Hartwell against the owners of the ship Rachel​ and a counter claim by the owners against Hartwell. ​Click on the image below to view the full document in a new window. 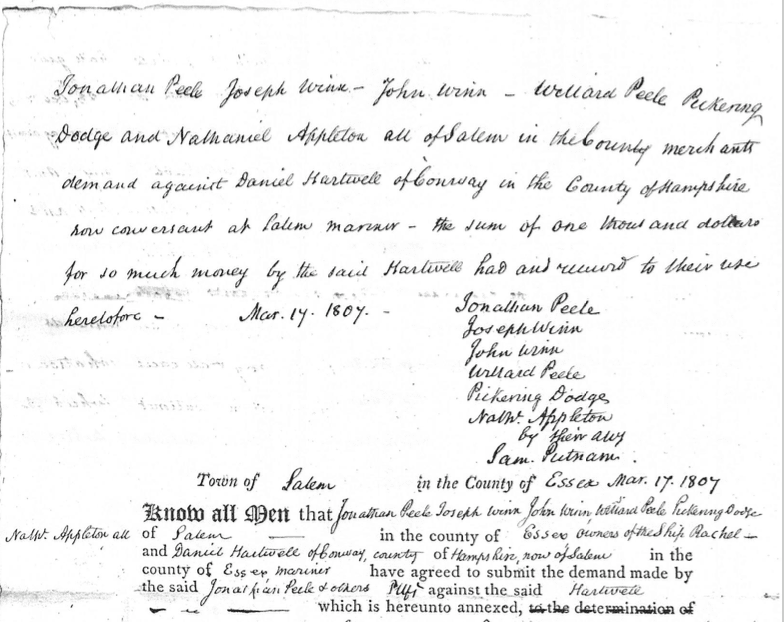 Source:  Essex County Court of Common Pleas, March Term 1807
Transcription
Page 1
Jonathan Peele, Joseph Winn, John Winn, Willard Peele, Pickering Dodge and Nathaniel Appleton all of Salem in the County, merchants, demand against Daniel Hartwell of Conway in the County of Hampshire now conversant at Salem, mariner, the sum of one thousand dollars for so much money by the said Hartwell had and ... to their use heretofore - Mar 17 1807 - signatures

the report of whom, or the major part of whom, being made as soon as may be to any Court of Common Pleas, to be holden in and for the said county of Essex judgment thereon to be final. And if either of the parties shall neglect to appear before the Referees, after proper notice being given them of the time and place appointed by the Referees for hearing the parties in this action, the Referees shall have power to proceed ex parte.  Jonathan Peele, Joseph Winn, John Winn, Willard Peele, Pickering Dodge, Nathaniel Appleton by their atty. Sam. Putnam and the said Daniel Hartwell personally appeared and acknowledged the above instrument, by them subscribed, to be their free act, BEFORE ME,
John Rinehard, Justice of the Peace

Salem March 20 1807 We the referees within named having notified, met and heard the parties within and above named on the ? ? within and above referred to due award and determine that the said Hartwell receive against the Jonathan, Joseph, John, Willard, Pickering and Nathaniel the sum of two hundred and eighty two dollars and ninety cents in full of all the demands submitted in this same as aforesaid and also ? of ? being seventy four dollars and fifty eight cents.
N. Dane
John. Prince Jr.
John Pickering Jr.