This letter to Calvin Bunker of Nantucket, Captain of the Ship Rachel, describes the expectations for his voyage from the ship's owners. Page 4 details a list of cargo to be taken on the outbound voyage. Click on the image below to open the full document in a new window. 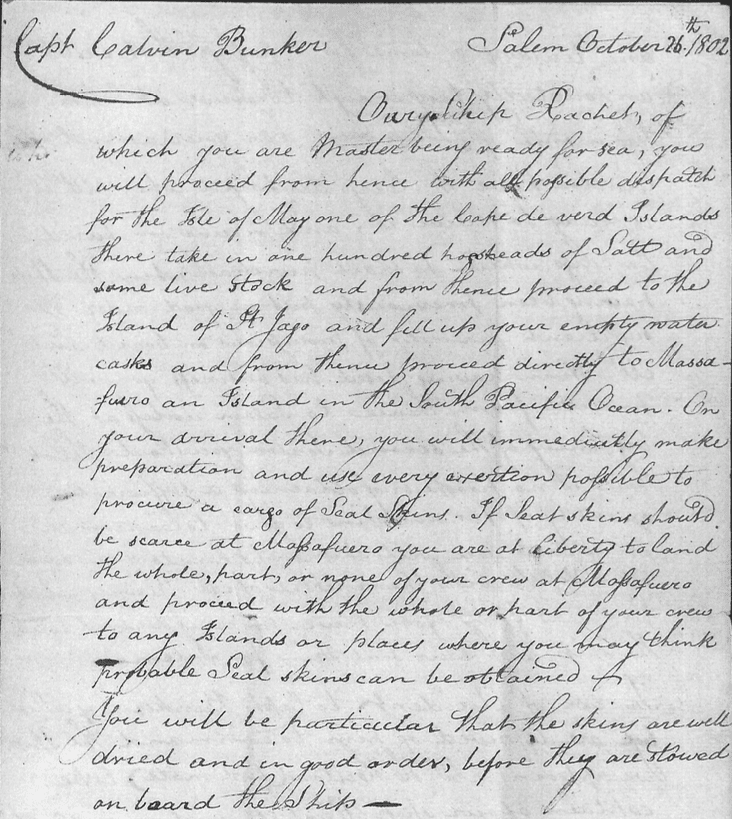 Our Ship Rachel, or which you are Master being ready for sea, you will proceed from hence with all possible dispatch for the Isle of May, one of the Cape Verde Islands. There take in one hundred hogsheads of Salt and some live stock and from hence proceed to the Island of Santiago and fill up your empty water casks and from thence proceed directly to Massafuero, an Island in the South Pacific Ocean. On your arrive there, you will immediately make preparation and use every exertion possible to procure a cargo of Seal Skins. If Seal Skins should be scarce at Massafuero you are at Liberty to land the whole, part or none of your crew at Massafuero and proceed with the whole or part of your crew to any Islands or places where you may think probable Seal skins can be obtained. You will be particular that the skins are well dried and in good order, before they are stowed on board the Ship.

If you should procure sixty thousand skins the first season and soon enough to go on to Canton to have the Cargo sold and another bought and leave there in all the month of March for Salem you will go on the first Season; if not you will carry through the second Season prolonging the time if for the interest of the voyage, but always bearing in mind that you must depart with a sufficient quantity of provisions on board (which must be at least three months) and

Page 2
leaving a time for a voyage that will be undoubtably long enough to arrive at Canton in the month of December. On you arrival at Canton have the Cargo discharged when Mr. Winn is ready to receive it, and receive on board the cargo which he shall purchase; when the Ship having been previously put in good order a sufficient quantity of provisions on board and Mr. Winn having closed his business you will proceed from thence to Salem unless at the beginning of the second Season you should think there is no prospect of obtaining a sufficient quantity of fur seal skins to go on to Canton in which case you will ship on to Canton in some other Vessel with the advice of Mr. Winn; what fur Seal Skins you have procured and load the ship with hair Seal Skins for Salem.

In case of Accident to Capt. Bunker by which we are deprived of him to command the Ship, we appoint W. H. Hilton (first mate) to be captain of our ship Rachel, and in case of our being deprived of Capt. Bunker & W. Hilton both, we appoint W. P. Clark (second mate) to be captain of our said Ship, both W. Hilton and W. Clark in such case to be governed by the foregoing instructions.

You will write us all opportunities.

Sir,
Annexed you have a copy of our instructions to Capt. Bunker, commander of our Ship Rachel by which you will observe that on the arrival of the ship at Canton, he is to deliver the cargo to you, which you will dispose of there for the most it will bring, and after deducting your commission and any charge arising upon the cargo you will pay to the officers a crew their parts that will be due to them agreeably to the contracted entered into between them and us, and the remainder which will be the cargo you will invest as per memorandum annexed, unless you think the cargo can be invested more profitably for us, in which case you are at full liberty to do it, taking care so to invest it as to fill the Ship, make all the dispatch you possibly can consistently with our interest and write us by every conveyance directing your letters to Jonathan Peele, c/o Salem, Massachusetts, North America. You will assist Capt. Bunker in ascertaining that all the adventures are included in his manifest, on the Ship’s arrival in Salem.

Page 4
Memorandum for a Cargo -

VizThe remainder of your stock would advise you to invest in yellow Nankins, Blank Lustrings, Black Lynchaus, Umbrellas and Black sewing Silks, being particular in not buying any coloured Goods whatever, and if there should be any alteration in this market we will inform you when we write to you