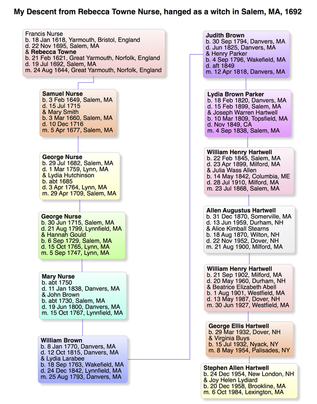 Click on the pedigree chart above to see it full size
Rebecca Towne Nurse (21 Feb 1621 – 19 Jul 1692) was executed for witchcraft by the government of the Province of Massachusetts Bay in New England during the Salem Witch Trials in 1692. She was the wife of Francis Nurse, with several children and grandchildren, and a well-respected member of the community.

Although there was no credible evidence against her, she was convicted and hanged as a witch on July 19, 1692. This occurred during a time when the Massachusetts colony was seized with hysteria over witchcraft and the supposed presence of Satan within the colony. Her married sisters Mary Eastey and Sarah Cloyce were also accused of witchcraft. Mary was found guilty and executed, but Sarah survived.
Source: Wikipedia, ​https://en.wikipedia.org/wiki/Rebecca_Nurse
Additional sources
The Trial of Rebecca Nurse, from History of Massachusetts Blog

Salem Witch Trials, a Documentary Archive and Transcription Project from the University of Virginia

The Rebecca Nurse Homestead, a Museum in Danvers, Massachusetts