A detailed accounting by John Winn, documenting by date each incident in which he had trouble with Daniel Hartwell. Click on the image below to view the full document in a new window. 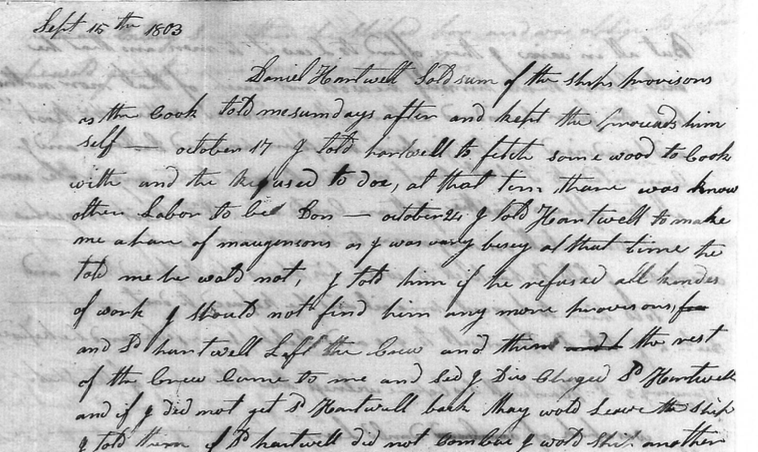 October 17 - I told Hartwell to fetch some wood to cook with and he refused to do so, at that time there was no other labor to be done

October 24 - I told Hartwell to make me a pair of moccasins as I was very busy at the time. He told me he would not. I told him if he refused all kinds of work I should not find him any more provisions, and so Hartwell left the boat and then the rest of the crew came to me and said I discharged D. Hartwell and if I did not get D. Hartwell back they would leave the ship. I told them that if D. Hartwell did not ?, I would ? another man in his room or I would make one man share up to them, but they would not accept either of these proposals, but if I did not see Hartwell in person they would leave the ship. I found myself under necessity to go and get him to return but he would not unless I would make him some compensation. I asked him how much would satisfy him, and he told me the other half of his lay in Canton and what he owed the owner of the ship which was about 30 dollars. I told him I would give it to him and called the second mate to witness the bargain and was to return the next day to my quarters and give the said Hartwell a receipt in full and my obligation to pay him his whole lay in Canton.

Sept 16th
I asked D. Hartwell to return home. He told me he had thought better of it and would not return without I would give him four hundred dollars. I tried to persuade him to his first agreement

Page 2
but all in vain. I then offered to leave it to men and that he must chase them himself. He would not accept that, nothing but the four hundred dollars. I then advised with Mr. Root and he advised me to give him the four hundred dollars and I consented to it, but Hartwell would not take my note ? all the officers together. I then called on Mr. Root to ? and draw a bill on my owners to secure Mr. Root.

January 3, 1804
D. Hartwell says before witness that the owners of the ship were afraid of ??

October 25, 1803
Omitted this day. I told Hartwell to go and catch some fish and he refused and went round island and was gone two days.

July ?, 1804
He stole the ship's longboat and ran away, and for consequence the ship was embargoed for a number of days at Canton. I offered to pay D. Hartwell if he would give up the note as did the rest of the crew and overlook his bad conduct but he refused to do it.
As I was expected to go to Europe I was obliged to ?? again and Hartwell refused to ? and would not and neither would he leave the ship, and after we arrived in Europe, Hartwell demanded his wages and stop the ship and could the magistrate of that port and compelled me to pay him wages and then he ? and when we went to get underway he refused to go unless I would give