Civil War Biography
adapted from Tompkins, Arthur F., History of Rockland County, New York, 1902
On August 12, 1862, Charles McElroy enlisted as a private in Company B of the 161 N. Y. Volunteers. He participated in many notable battles during his three years of service. In the fall of 1862, under General Banks, the famous expedition to New Orleans was accomplished, and from there they went to Baton Rouge and bombarded that city, remaining there until the Spring of 1863. They then marched on Port Hudson and besieged the fortiﬁcations for forty seven days, until June 8, when the enemy surrendered. It was a notable victory, this place and Vicksburg being the two vital points of the situation. Their next engagements were at Cox’s plantation, Donnelsonville and at Sabine Pass, being defeated at the latter place. They then started on the Red River campaign, constructing the historical dam that ﬂoated the ﬂeet over the rocks at Alexandria, after which took place the engagements at Sabine Cross Roads and Pleasant Hill. Mr. McElroy witnessed the surrender of Fort Morgan at the mouth of Mobile Bay, to Admiral Farragut. In the spring of 1865 they returned to Mobile Bay and besieged Fort Spanish across the river, and also participated in the charge on Fort Blakely, ﬁfteen miles away. After capturing these two points they crossed and took possession of the city of Mobile, which they garrisoned the two months following. They then went to Barancus, Apalachacola, Fla., and Dry Tortugas, where they garrisoned the fort until October 20, 1865, when they were mustered out of service.
Civil War Military Records
Click on any of the thumbnails or links below to view the corresponding document full screen in a new window
Civil War Discharge Document
Click on the thumbnail below to see it full size, along with a transcription, in a new window 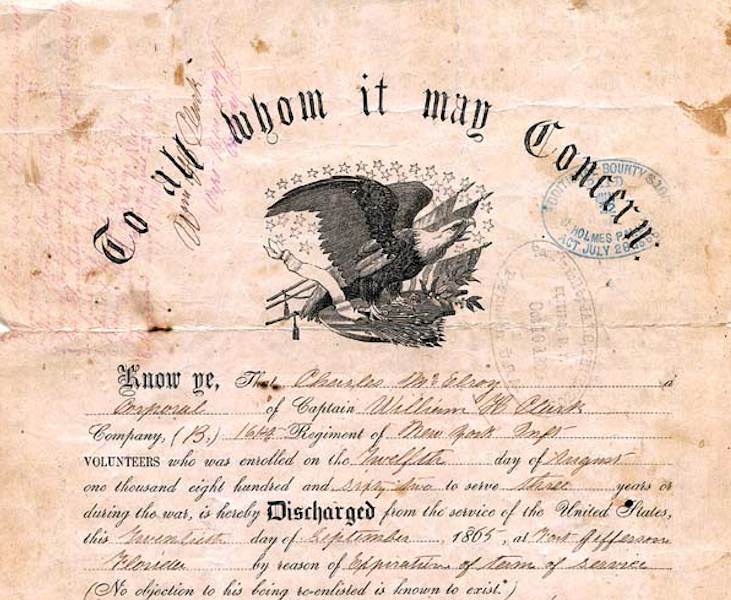 1896 Letter from a Fellow Soldier 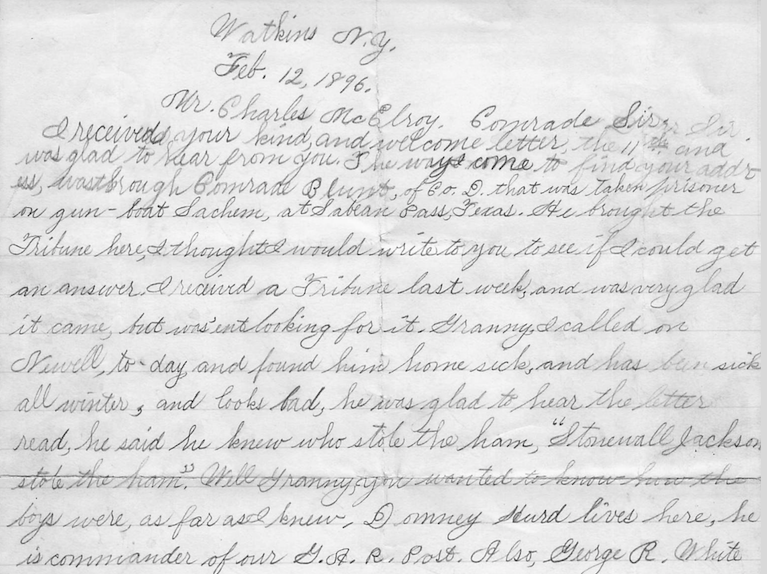 1896 letter to Charles McElroy from a fellow soldier. Click on the thumbnail above to see the entire two page letter.
Transcription
Page 1
Watkins, N.Y. Feb 12, 1896
Mr. Charles McElroy
Comrade Sir,
I received your kind and welcome letter the 11th and was glad to hear from you. The way I came to find your address was through Comrade Blunt, of. Co. D. that was taken prisoner on gunboat Sachem, at Sabine Pass, Texas. He brought the Tribune here; I thought I would write to you to see if I could get an answer. I received a Tribune last week, and was very glad it came, but wasn't looking for it. Granny, I called on Newell today and found him home sick, and has been sick all winter, and looks bad, and he was glad to hear the letter read, he said he knew who stole the ham, "Stonewall Jackson stole the ham." Well, Granny, you wanted to know how the boys were, as far as I know. Domney Hurd lives here; he is commander of our G..A.R. Post. Also, George R. White lives here; he is carpenter and builder, the same as you are, he is in good shape. Charlie Kriss is here too; he keeps a liquor store. Edd. McClintic lives in Elmira; I guess he is all straight now. Albert Cooper lives at Bennettsburg three miles east of Watkins. Ben Brewer lives at Trumensburg. Dave McClure lives in Steuben Co. George Losey lives in this county, Tyrone. George Crum lives in New York City. Will Peck, Bart Biels, Bill Beckwith, I don't know where they are. Su Wilson lives here. Joe Phelps lives west of here about five miles. Capt. Clark lives close by him. This man John F.

Page 2
Mosher, I don't recollect him, but Newell does. Newell say "She done some guard duty in New Orleans." Well, Dave Chapman is dead, he died about a year ago. G. V. Wright lives in East Troy, PA. That is all I recollect now, except one comrade you left out Sister Sally, dodger, Boy John Carr, the one that closed the war at Donelsville, and Sabine Cross Roads. You know that Sally won these two battles, he is the same old Sally, he calls on me every once in awhile. He is the man that put down the rebellion. I will see James Wilkes, and where Peter's P.O. address is. Well, Comrade, do you know who killed Old Doc's billy-goat? "I did," says Cock Robbin. Newell says, "At Camp Newell-beri, on Christmas, when they had that big dinner, and buried the Comrades in the dry ditch, that he thought of the hundred and sixteenth New York, Sutter 16 dollars worth of quine, in canteens, that was a great day. I have forgotten where the next reunion will be, but I will find out and let you know. I was at Washington to the Grand Encampment and stayed four days. The 161 was well represented but did not have a chance to shake your hand there. Well, Comrade, I don't think of nothing more to write, but hope by the Grace of God may meet, and shake hands, on this earth. I will close now hoping to hear from you soon.
From Mr. L. P. B. Snow and So-Note-To-Be
Box 645, Watkins, N.Y.
From Bowny to Granny