A letter written from John Winn to the ship's owners while the Rachel was at sea around the Cape of Good Hope in Africa. Click on the image below to view the full document in a new window. 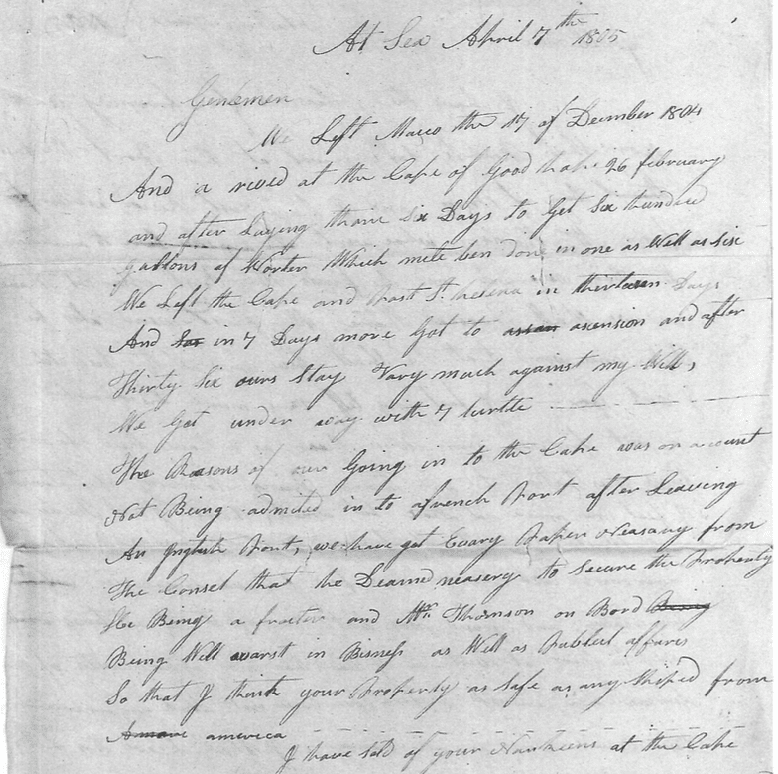 Gentlemen,
We left Marco [?] the 17 of December 1804
and arrived at the Cape of Good Hope 26 February,
and after laying there six days to get six hundred
gallons of water which might be done in one as well as as six.
We left the Cape and past St. Helena in thirteen days
and in 7 days more got to Ascension [Island] and after
thirty six hours stay, Very much against my will,
we got under way with ??

The reasons of our going in to the Cape was on account
of not being admitted to French Port after leaving
an English Port. We have got ? ? ? from
the Consul that he deemed necessary to secure the property
So being a factor and Mr. Thomson on board
being well aversed in business as well as ? affairs
So that I think your property as safe as any ship from America.

I have sold your Nankins at the Cape.
Six hundred and eighty pieces at one dollar and nine hundred
and sixty at x five cents. The amount of
the charges of getting the nankins on shore
there is twenty three dollars and forty cents more
that I let Mr. Thomson have at the Cape.
The remains of the bill is the present
property of J&J Wims. I have sold two hundred and ten pieces after the
bill was drawn at one dollar per piece and
I have the money on board.

Page 2
We lost one anchor and one half of the small
cable in the Straits of Bankey [Banka, between Bangka Island, Indonesia, to the northeast and Sumatra, Indonesia, to the southwest]. The new cable and the remainder half is all that we have got.
I think there is no goods that will answer the
Cape ? at present, it being very much
? at present and nothing to be purchased
for the American market.

Be so kind as to inform
Mr. John Norris that his ship ? arrived at Cape
a Bant [Bantry Bay, Cape Town, South Africa] the last day of February all well except
one man being confined with the rheumatic complaint
Likewise, Capt. Joseph White of his Ship M.S.L
Capt. H. White he being very unwell
with the Fever complaint found his brother
at the Cape and gave the charge of the ship to him
and had ? concluded to come home.
Likewise

Page 3
The freight money amount to sixteen thousand dollars and upwards after paying the officers first due them. They claim I have ? and have put ? goods for them mostly.

J. ? the ships accounts and the ? bills the one so long throw Miss Stark the bill of Mr. Thomson's is to be paid in Providence by the ? brother in case of accident. To the ship and more and is not paid for yourself you will know it is a Bow.

The reason of my selling the teas and buying nankins was they would stow whereas teas would not and buying the Chinese root on account of storing it in bulk near the bottom of the ship thinking she might be ? ? being no below a Bow the platform.

I have is one hundred and eight seven and one half ?? goods at ninety five dollars for being nankins the ? is teas and the ship might land fifteen tons more and not have been fuller than other ships in ? that left this season, it is not my fault. We are cleared ? for Antwerp and are bound there where I expect to find your orders there on what to do with the ship. I should think to go to St. Petersburg unless some ? should make us too late.

I have but one enjoyment that is ?? Wish you all the same blessing and better ? in your ? ? where for this voyage is the greatest mortification I have ever met with.