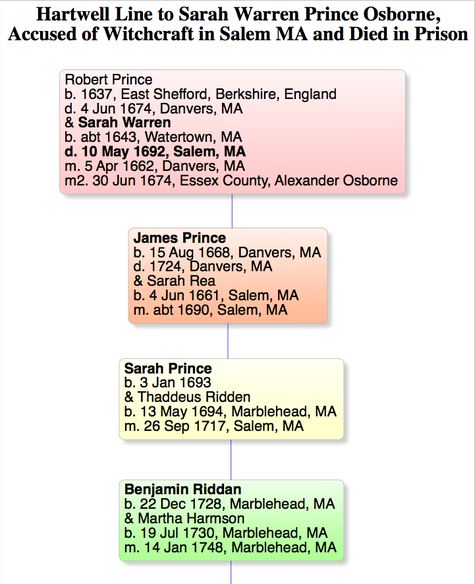 Click on the pedigree chart above to view it full size
Many would say she had it coming.  For years she had lived under a cloud of disapproval.  When rumors of witchcraft started spreading in 1692, Sarah Osborne's name sprung instantly to people's lips.  She had long been ill, and according to some, her husband beat her. But her worst sin, perhaps, was greed.

She had begun life as Sarah Warren in Watertown, Massachusetts.  In 1662, she married Robert Prince, who had purchased a on-hundred-and-fifty-acre farm in Salem.  His sister was married to Captain John Putnam, who lived next door.  Putnam was part of a faction that supported Salem Village's new parson, Samuel Parris, and the villages independence from Salem.  Prince died in 1674, leaving his land in trust to Sarah, on the understanding that she would divide it between their two sons, James and Joseph, when they came of age.  As executors, Prince had named his two brothers-in-law, John and Thomas Putnam.

Now widowed with two small children, Sarah sought help tending the farm.  She found a young Irishman, Alexander Osborne, purchasing his indenture for fifteen pounds sterling.  Though considerably older than he, the two became romantically involved.  Eventually they married, but the notion of an unmarried man and woman sharing the same roof-even temporarily- had set tongues to wagging.  An even bigger scandal was looming.

Sarah, perhaps anticipating more children, decided to challenge her late husband's will and fight for control of his property.
The legal battle lasted years.  Before it was resolved, Sarah and Alexander Osborne were long dead, and her sons were fifty two and forty eight.  But the Putnam's revenge was as swift as the court proceedings were slow.

In February of 1692, Thomas Putnam, his brother Edward, and two others rode to Salem to file complaints against Sarah Osborne, Sarah Good, and Tituba for wreaking "mischief" against Ann Putnam Jr. and three local girls.  Though she had been bedridden for more than a year, Sarah was arrested the following day and carted to Salem Village for questioning.
​
On May 10, as the witch hunt was just taking off, Sarah Osborne became its first victim, her heart giving out in the jail's gloom.  Frail even before enduring the difficult voyage to Boston, she had lain in the cold for nine weeks and two days.  Jail keeper John Arnold made a note of the number of days in jail in his ledger, adding that her prison bill- one pound and three shillings- had been left unpaid.
​Source: "The Victims" 2nd chapter of Death in Salem, The Private Lives Behind the 1692 Witch Hunt, by Diane E. Foulds