Letters from Wesleyan (1926-1928)
The following letters were written to William Hartwell's parents, Allen Augustus Hartwell and Alice Kimball Stearns while William was doing his graduate work in physics at Wesleyan University in Middletown, Connecticut, and his parents were living in Milford, Massachusetts. 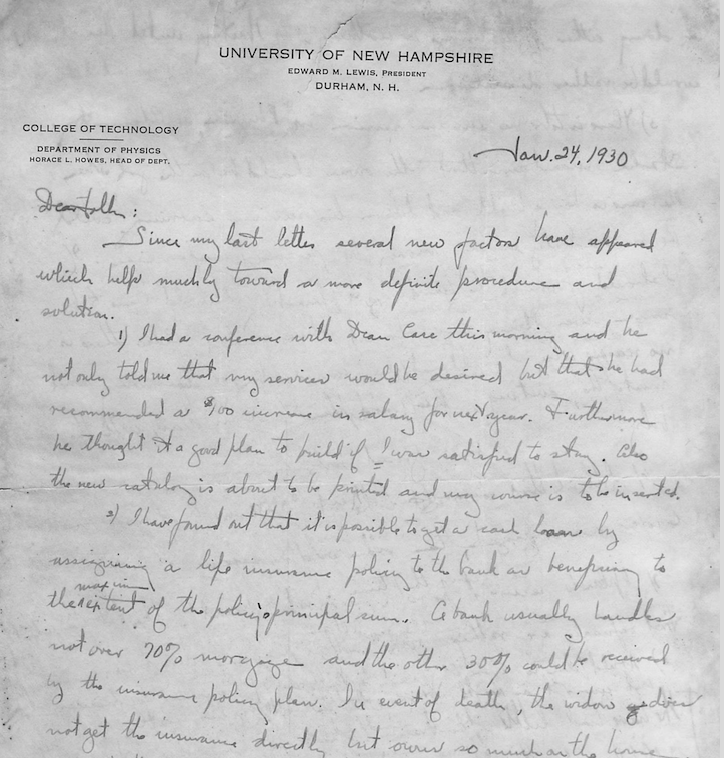 24 Jan 1930 letter to his father Allen
This letter provides details regarding the building of the new Hartwell house at 30 Bagdad Road in Durham.
Transcription
Jan 24, 1930
Dear Father,
Since my last letter several new factors have appeared which help muchly toward a more definite procedure and solution.

1) I had a conference with Dean Case this morning and he not only told me that my services would be desired but that he had recommended a $100 increase in salary for next year. Furthermore he thought it a good plan to build if I was satisfied to stay. Also the new catalog is about to be printed and my course is to be inserted.

2) I have found out that it is possible to get a cash loan by assigning a life insurance policy to the bank as beneficiary to the maximum extent of the policy principal sum. A bank usually bundles not over 70% mortgage and the other 30% could be received by the insurance policy plan. In the event of death, the widow does not get the insurance directly but owes so much on the house.

4) All those who have recently built advise strongly that actual construction begin April 1 in order that the home be ready by Sept. 1. Under that advice we have accelerated in doing either of two things or nothing. Waiting until March 21 would be rather disastrous.

5) There is no summer session in Physics or Chemistry. Starke (?) maintains that the owner should be on the job when the house is being built and believes his summer earning could be secured by saving money by personal supervision. If I should furnish the hardware & plumbing, I would have to be sure everything was around when needed. Also, there is no reason why I could not do considerable of the wiring and most of the painting. Bea would plan to be in Mass, with the baby.

6) I think that I would take out $5,000 worth of insurance more to cover a mortgage, then all could be safe.

7) I plan to secure if possible a on the lot immediately. First refusals are rather risky in this place anyhow.

8) Would plan to come by train to Milford if necessary to discuss situation, but guess it can be done by letter as well & is less costly.

9) We plan or hope to have another baby by the time Priscilla is three years old at the latest, and it would be unwise to have home building troubles a year before or during the process.

All this sounds very ambitious, but we are young & vigorous.